“Before Elvis there was nothing” – John Lennon.

I was 10 years old when the King of rock ‘n’ roll died.  Even at such a young age it had a great impact.  I grew up in a house full of music and knew who he was.  It was the first time I had experienced a whole country in mourning, and although we have seen it again since (Princess Diana and more recently David Bowie), it left an impact.  People love Elvis for different reasons. He could sing, he cared for his family and for many, including John Lennon, he changed the lives of generations to come.

One night of Elvis is actually a night with Lee Memphis King.  This is an event for Elvis fans of all ages.  It really pays respect to the king and everything about it is done in an affectionate way.  There was no hint of bad wigs or a karaoke style show.  This is a class act.

We are first offered a bit of a background to Elvis with photos of him on a big screen.  It tells the story up to the ‘68 special and this is what the first half is all about.  Lee Memphis King comes out in black leather and looks and more importantly sounds just like Elvis.  We are treated to a range of songs from the ‘68 special including Trouble, Blue Christmas and If I Can Dream. The musicians bring their chairs into a small circle and have an impromptu chat with the audience to recreate the authenticity of the 68 special.  They asked for requests and then Lee has to admit he doesn’t know the words to Don’t.  He also told us the story of Blue Christmas.  Apparently, Elvis hated this song so asked the backing singers to do anything they could to ruin it so it was not released as a single.  The stories and interaction made the show feel intimate and that you were a real part of the show rather than just a spectator.

The second half of the show celebrates the Vegas years. This included classics such as CC Rider, Burning Love, Suspicious Minds and also some lesser known songs such as Polk Salad Annie, Its Midnight and of course Elvis’ version of My Way. They covered the American trilogy and of course finished on Can’t Help Falling in Love with You.  Lee jokes that tonight was not a sell-out yet every single show of Elvis during the Vegas years was.

This is so much more than a tribute act.  This is a show with personality and feeling.  With great songs and a real passion for Elvis Presley.  This show is made for anyone who loves Elvis – you will not be disappointed. 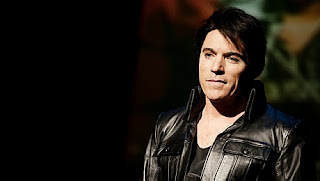