Squeeze – You can take me - I’m yours


Do you remember how a crush affects you? It hits you suddenly and with such a force that you are breathless. Well last night – that’s how I felt about Squeeze.  To be honest, I didn’t know much of their back catalogue, but for some reasons unbeknown to me I owned a copy of labelled with love which I knew all the words to – and let me tell you this was no mean feat before the days of internet, where you either had to listen to a song repetitively to learn it (and sometimes still sing the wrong words) or hope Smash Hits would print them for you.  Labelled with love has turned into a song I sing a lot and there is a famous video of me in 1999 singing it which will not see the likes of YouTube, but suffice to say I give it my all.  Last night Squeeze progressed from ‘an old but good friend’ status to a full blown love affair.
The evening started with John Cooper Clarke who is a poet.  I couldn’t believe people in the audience hadn’t heard of him – but I was familiar with his work.  He was very funny, telling jokes in-between the poems.  I would say his style is a frustrated punk/aggressive poet. He easily won over the audience and despite his swearing comes across as a lovely guy.  (Sorry John but you do).


Then came the main event.  To be honest I am a lyrics person and love singing along so was a bit worried I wouldn’t know many songs.  Actually I shouldn’t have worried.  I knew far more songs than I had given myself credit for.  And those I didn’t know were from the new album which is officially released this week.
Classics such as ‘Is that love?’, ‘Goodbye Girl’, ‘Pulling Mussels from a shell’ and ‘Up the Junction’ were mixed with new tracks such as ‘Happy Days’, ‘Only fifteen’ and ‘Cradle to the Grave’.  Of course when they played Labelled with Love I sang it very loud, I still knew every word.


So what made me fall in love with Squeeze?  Just like a love of anything, it’s a combination of things. They were very professional so it was really good value for money no matter how much you paid for your ticket.  They played a range of instruments that I don’t think I’ve ever seen on one stage before.  This included accordion, ukulele, double bass, mandolin and some instruments that I don’t even know the name of.  This was in addition to 12 string guitars, electric guitars, electric acoustic, bass and of course Glenn Tilbrook’s black battered electric which looks like it’s seen better days –but boy did he play the shit out of that thing!  At one point I thought his guitar playing was so awesome that I would describe him as a ‘folk Hendrix’.  And his voice IS Squeeze.  It’s so recognisable.  Chris Difford has a different style.  He is very warm to the audience and interacts with them.  He also sings and plays guitar and you will recognise his vocals from tracks such as Cool for Cats.
Many of you may think that Squeeze is purely Difford and Tilbrook.  But let me tell you that every member of that band deserves a mention as they are all amazing musicians in their own right.  Lucy Shaw is on bass.  It’s fantastic to see a girl on bass but not just bass as she pulls out a double bass when you were least expecting it.  Stephen Large (known as the cool one) is keyboards.  But again not just keyboards – anything with some black and white keys he can pick up and play.  And where does a drummer sit?  At the back but what a drummer he is!  Simon Hanson has such a presence – it’s never about sitting quietly with a drummer.  You will easily recognise him as he looks a bit like Bruce Willis (Tell me I’m wrong!), Although Simon would much prefer to be compared to be Brad Pitt. Finally Melvin Duffy plays ‘steel guitar’. (Yes I had to look that up).  He is obviously having a great time and smiles such a lot while on stage.  All of them together make up Squeeze and have worked together to make an incredible new album which deserves the recognition and praise it is currently receiving.


They played a couple of tracks I particularly want to mention.  ‘Black coffee in bed’ is a track where they announced they had a special guest.  I couldn’t think who it could be.  And then they announce it’s Paul Young.  Well my heart nearly stopped beating - what an amazing collaboration.  And during Slap & Tickle all the band members came to the front of the stage and had a ‘play off’ of their instruments.  It was an amazing moment.  They all looked like they were having a good time so when Chris told me to stand up and dance, I did.  It took a couple more hints before the rest of the audience joined me but eventually everyone was on their feet dancing.
I met the band afterwards and they are all just as lovely in real life as they seem on stage.  They had noticed my dancing – See its worth making the effort!


If you haven’t already, you should all go and buy the new album Cradle to the Grave and if possible get a ticket to see a gig (they are touring until 24 October).  I almost feel ashamed to say I don’t know their entire back catalogue but I’m going out to buy it all now!
You cannot escape Squeeze.  Cradle to the Grave is a new show on BBC2 comedically documenting the life of a young Danny Baker.  Not only did Squeeze do the theme tune but also other tracks such as Only Fifteen.  And their new single ‘Happy Days’ is being played on national radio.  So do what I did.  Give in to it and fall head over heels in love with Squeeze. 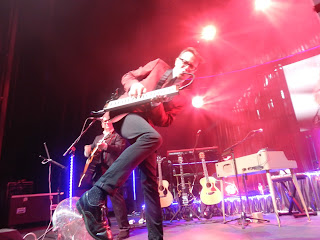 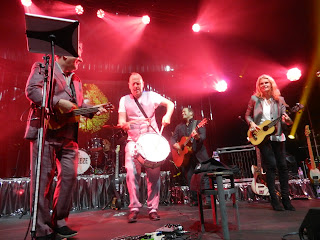 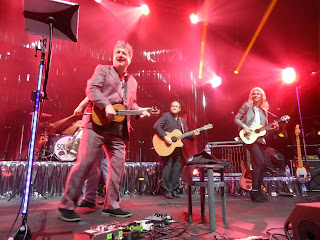 My review of Dirty Rotten Scoundrels is now online on the About Milton Keynes website: http://aboutmiltonkeynes.co.uk/dirty-rotten-scoundrels-milton-keynes-theatre-review-2/ 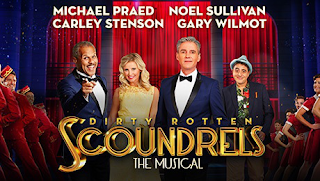 The Importance of Being Earnest

This review originally featured on the 'About Milton Keynes' website:

The Importance of Being Earnest.


Oscar Wilde’s The Importance of Being Earnest was first performed in 1895 and is still making audiences laugh today with its wit and dry humour.  The play is a classic and one of Oscar Wilde’s best works with its rather complicated storyline.  This version has been sprinkled with a modern twist and has a sublime script.  How often do you see Nigel Havers in bright red Nike trainers on his mobile phone?  This particular show starts with a group of people deciding to put on a performance of ‘The Importance’ so some in-house theatrical humour has been added.  For example there are comments about when should cucumber sandwiches be available for a dress rehearsal and a discussion about if Algernon should add a wink.  But the ‘director’ wants ‘More Oscar less Panto’.  It’s defiantly a new way of performing the show and the modern twist gives it definition to when they are ‘performing’.  Also, I’m quite sure the 50 shades reference was not included in Wilde’s original work. (Add wink here, Mr Director).
The ‘Importance’ storyline starts with Algernon Moncrieff meeting his friend John Worthing who Algie knows as Earnest.  Algernon is played by Nigel Havers and he is totally charming in the role.  He gives the lovable rogue his own touch and you can’t help but like him.  There is even a comment in the script about his good hair!  Martin Jarvis plays John/Jack/Earnest and is absolutely fantastic.  His diction and delivery of the role is exquisite and as he and Nigel are on stage for most of the play, they hold the show together.


Earnest is in love with Gwendolen, Algie’s cousin and when Algie asks about the inscription in his cigarette case,  Earnest admits he is living a double life. In the country he is known as John (or Jack, his nickname) to look after his ward, Cecily. In the city he is known as Earnest.  Gwendolen and her mother, Lady Bracknell then calls on Algernon and he distracts Lady Bracknell while Jack proposes to Gwendolen.  She accepts but makes it clear she could only love someone with the name, Earnest.  Lady Bracknell is played by Sian Phillips and although she isn’t on the stage for much of the show, she gives such a presence that you are left wanting more.  Sian is outstanding as Lady Bracknell and gets some of the best lines such as:


·         “To lose one parent, Mr. Worthing, may be regarded as a misfortune; to lose both looks like carelessness.”


·         “I have always been of the opinion that a man who desires to get married should know either everything or nothing. Which do you know?”


·         “To speak frankly, I am not in favor of long engagements. They give people the opportunity of finding out each other’s character before marriage, which I think is never advisable.”


·         “You are perfectly right in making some slight alteration. Indeed, no woman should ever be quite accurate about her age. Thirty-five is a very attractive age. London society is full of women of the very highest birth who have, of their own free choice, remained thirty-five for years.”
The next scene finds us in the country with Cecily, Jacks ward, who is studying in the garden with Miss Prisim, her Governess.  Algie turns up at the country house pretending to be Earnest, Jack’s brother.  Algie and Cecily fall for each other and it turns out Cecily also has a huge affection for the name Earnest.  Jack then returns to the house, pretending to have killed off Earnest.  Then Gwen turns up and in the absence of the two men she meets Cecily who while they decide to be friends then confide in each other they are both engaged to Earnest.  Cecily is played by Christine Kavanagh and Gwendolen is played by Carmen Du Sautoy. This scene is a perfect opportunity for these two wonderful actresses to show their skills as they are both not happy about the other being engaged to Earnest.
This show has a stellar cast full of veteran actors who give a fantastic performance.  It is such an enjoyable play that it is of no importance if you know the show well or have never seen it before.  All that matters is that "I've now realised for the first time in my life the vital importance of being Earnest."
Posted by Jas at 14:06 No comments: