The Hobbit - The battle of the five armies.

The Hobbit – the battle of the five armies
Well if you don’t know about Middle Earth and Lord of the Rings / The Hobbit films by now where have you been?
Middle Earth is my place of choice to fantasise about. I love this more than Star wars, Star Trek or any other Sci-fi fantasy film. This is my home.


My long hair hides my pointy elfish ears and my home is Rivendell.  But I digress….
Anyway this is the last of the Hobbit films…It starts exactly where it left off with the dragon about to attack lake town. It’s like someone unpaused the film. So you do need to have seen the other films to get this one.


There is less humour in this one and a huge amount of action. It’s almost too much action. Too much cgi. I want more magic. I want Gandalf the Grey to use his magic. I want more interesting dialogue.
But I love hobbits, dwarfs and elves and unite with them against orcs. I hate orcs. I forgot I was in a cinema, I was in Middle Earth. I was ducking and avoiding the swords and arrows. I was screaming at Thorin that the Orc wasn’t dead and it was going to be a ‘Carrie’ moment under the ice…


For those who don’t love The Hobbit they won’t love this. But for me…I enjoyed it a lot. It’s not my favourite film..but another adventure of my favourite dwarves.
Finally...where does a major keep his armies...up his sleevies of course!
Merry Christmas! 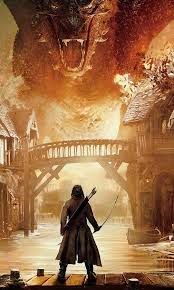