Tarrantino never disappoints and this is also another Tarrantino classic.


The story is one of revenge.  In that respect is it very similar to Kill Bill.  But instead of a mother’s love for her child, this is a story of slavery and a man’s love for his wife.


It is a western and yet unlike any western film you will ever see.  It is violent as you would expect a Tarrantino film to be but he excels himself with the script.  A fantastic script, as in most of his films, where people will be quoting from for years to come.


Example two: ‘You had my curiosity, Gentlemen. Now you have my attention!’


Jamie Foxx plays a slave named Django, who meets Dr Suhultz during the first scene of the film.  (Which is a great scene).  Dr Schultz is played by Christoph Waltz, who was outstanding in Inglorious Basterds as Hans Landa.  Unfortunately he plays Dr Suhultz almost the same way and his mannerisms and way he tries to talk his way out of a situation feels so much like Landa, it makes me feel that Tarrantino needs to widen his use of the actors and find a few fresh faces.


For me, Tarrantino’s film dialogue is what makes Tarrantino stand out from the rest of the crowd.  However I need to warn those with a delicate disposition to the ‘N’ word that it is used in nearly every sentence by both black and white.  Mary Whitehouse would be turning in her grave to hear the language that is used.  However this is Tarrantino’s world and this is acceptable in his world.


Samuel L Jackson gives an absolutely outstanding performance as Stephen, an old slave who works for the Candie family, an old codger who is very loyal to Calvin Candie (played by Leonardo DiCaprio.  Boy he has come a long way since Titanic!). I enjoyed Leo’s portrayal of a rich southern man and found his accent very accurate.


Some scenes are beautifully shot.  There is a scene in a cotton field where Dr Schultz shoots a bad guy from some distance and you see a pretty splattering of red blood on the clean white cotton.  There is another scene where some of the Candie family are walking home after a funeral, and are almost silhouetted against the evening sky. It is a very effective scene (despite it reminding me of the scene when Kill Bill’s Deadly Viper Assassination Squad are about to kill the bride!)


The soundtrack for Tarrantino films are always very well sourced and this film is no exception. I felt the soundtrack matched the scenes perfectly.  Even the titles are thought about.  When they get to Mississippi, the title fills the screen so you know this is a significant place.


What I love about Tarrantino films is the way he thinks about all these little things.  It works.  There are some issues with this film such as when he shoots Calvin Candie’s sister, she flies back like she is on a wire but the truth is she is at the wrong angle for her to be pulled this way.  I would question that some of the shooting would be as accurate as it appears to be.  Everyone has a bad day and must miss now and again!


I also felt that we didn’t really connect about the motivation that Django had to save his wife. He had nothing to lose and before he meets Dr Schultz he doesn’t seem that motivated.  Tarrantino missed a point of showing how their love and life as man and wife was together before  separation may have made us understand his motivation better.  Instead all we see is a flash of his wife in a yellow dress on his way to Candieland.  His wife is most definitely seen as a minor character in the film.


The film plot is similar to Kill Bill as I have already mentioned, but there is one scene which feels like it is totally copied from Kill Bill. The scene where The Bride (Beatrice) has just killed most of the crazy 88’s and said those who are able to leave can go – ‘But not you Sophie’.  The same thing is said when Django says all the black folks can go ‘But not you Stephen’.


I also think that Tarrantino is a much better writer and director than he is actor.  He has a small cameo in this film which is dreadful and I truly wish he had put someone else into that role despite him only having a few lines.


Because the film is generally excellent and because I love Tarrantino, I am prepared to overlook the small issues and say this is another fantastic film. It is not a pulp fiction or Kill Bill, but neither is it a deathproof! You don’t have to love Western films to enjoy this.


One final warning – it is one of Tarrantino’s longest films.  Think of it as getting more for your money! 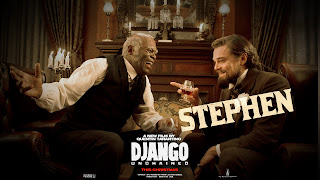 
Les Mis has blown me away. I have never seen the show before nor do I know the story as 1) I dislike films on history. 2) I dislike films on war. 3) I am not a fan of the French.  So this was my first experience of Les Mis. And for someone of many words, all I can say is WOW!!!
Rule number 1. Do not bother to see this film if you hate musicals. There is hardly any dialogue that isn’t sung.
Rule number 2. You are allowed to clap after a moving scene. Yes it is cinema but some of these performances deserved a standing ovation.


This is set in France during the French revolution. The first scene is amazing and better than it would ever be portrayed on a theatre set. (Which is hard for me to say as an ex-stage actress myself). But the perception it is filmed from and wetness of the sea on the men really gives it another dimension.
The outfits are great but I think have been borrowed many times by Adam Ant and Coldplay! Even the young rebel looks a bit like laddie from The lost boys.
There are so many outstanding performances to mention but I have to give my Storm award (better than an Oscar!) to Anne Hathaway who plays Fantane. She plays the role with such heart and emotion.  She is a real actress who gave her locks for her art. (They hack her hair off in a scene and she let them do it to experience it). This really works.  All the actors sing live and Anne’s big song is ‘I dreamed a dream’ which she sings with hope and despair and emotion. I can completely forgive her for her ‘One Day’ accent now (well almost).
Hugh Jackman (yes Wolverine to most of us) is another actor giving another outstanding performance.  He is the main thread of the film and again, gives the film heart.  Who knew he could sing?  Russell Crowe is his nemesis and they meet several times over the years throughout the film. They work well together with no one actually stealing a scene but complementing each other.
Samantha Barks plays Eponine and although it is a smaller part than others, I thought she gave it her all. Amanda Seyfried from Mamma Mia fame is Cosette . Thank goodness this is the only link with Mamma Mia as I hate what they did with that film. (Using famous actors who couldn’t sing a bloody note!). The young Cosette is played by Isabelle Allen and she is outstanding in her small role. I predict a wonderful future for this young actress.
I even quite liked Sasha Baron Cohen as the Innkeeper, but his wife is played by Helene Bonham Carter and she plays it all wrong.  It is almost like she has reprised her Sweeney Todd role. Now I am not getting at Helene – Oh no she can act. Look at Lady Jane Grey or The Queen mum in the King’s Speech. She was amazing. But Tim Burton has tainted her character and now she is the person everyone calls on for a ‘quirky’ character. She belongs in Harry Potter, not Les Mis and to put on a cockney accent absolutely spoils it when Sasha is doing is best impersonation of a Frenchman. They are the light entertainment of Les Mis and do bring another dimension.
This is a long film, but so is The Hobbit and Django unchanged so maybe this is the trend to be able to tell the full story. Think of it as getting more for your money. You are not clock-watching in Les Mis. You are living and feeling their pain.
Verdict: Outstanding film version of Les Miserables. If only ‘Lincoln’ hadn’t come out at the same time this would win all the Oscars. If you love great acting and a story with heart, this is for you. 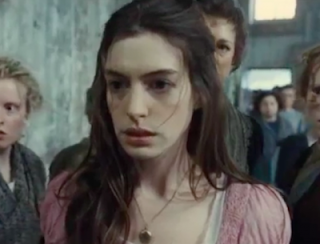 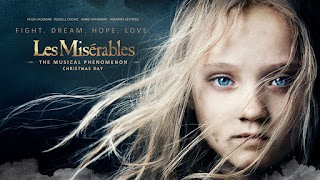