Read all about it - OAD is the cure for the common cold!

I am gonna be so rich and famous!  Why I hear you ask.  Well I have found the cure for the common cold!  I really have.


I was sent home from work on Thursday as everyone got fed up hearing me cough around the office.  Was so poorly I rang in sick on Friday.  I had tried chicken soup, loads of tablets and water, anything that I could to try to get better, but I still felt awful.
There was no way I could see myself going to OAD, despite the tickets for train being booked and the hotel paid for.  My husband said he would go and give my apologies.
I agreed to go to the hotel and relax.  That might help and it would at least keep the germs out of my house.
On the train up there I felt like I was in a horror film.  You know the kind – The Cassandra Crossing or Contagion comes to mind.  I was the character who had the virus who would share it all before dying within the first ten minutes of the film.  My husband’s character was the hero who would save the world and become self-sufficient in a remote shed (are there many of those in Birmingham?).  Anyway you get the general idea.  I was not imagining this as you should have seen people’s faces as I coughed and sneezed my way during the journey.  Virgin train passengers were not impressed and looked angry fed up or concerned about catching my germs.
We booked into the hotel about 4pm.  I could barely eat my dinner in the pub next door and decided I wasn’t able to go.  I went back to the hotel and had a short sleep which was much needed.
But Hubby kept saying I should try it and we can come home if needed.  So with hours to go I started to get ready not knowing at any moment if I would launch into another coughing fit.
By the time I was ready to go; I had stopped coughing and didn’t look that ill.  So on the surface I looked ok.  In the fresh air I felt a lot better.  I don’t know if it was the adrenaline for OAD, I had missed it so much as we had not been able to go last month due to Hubby’s work commitments but this was having an impact on my health. In a good way.
As soon as I got there I felt well.  I mean no cough, no cold, no sneezing.  Nothing.  I also found great music, lovely people and fab environment.
Not only did I feel well but then I felt so happy with the choices of music played.  It was as if someone had hacked my dream list of OAD tracks from my computer (Yes I do have one of those) and decided to play them all.
I had no choice.  I had to dance.  The first song to get me on the dance floor was (we don't need this) fascist groove thang by Heaven 17. I had only seen it done live by Heaven 17 the week before but this song never gets old!

Following that compulsion was ‘No GDM’ by Gina X which I love and was on the dance floor singing and dancing away.  The next stand out track was ‘The Bunker’ by The Bollock Bros.  (Is it me or does the backing of both tracks sound very similar?)  I love this too and danced away.
As a huge Bowie fan I like to mix with other huge Bowie fans.  I was deep in a Bowie conversation when the ultimate song that gave me a compulsion to dance came on.  It is no secret that I have been asking for this for months.  And the track?... ‘Bela Lugosi’s dead’ by Bauhaus.  Back in the day I was known to wear capes and be always on the dance floor to this (normally the only one as most DJ’s were too scared to play it during busy periods).  Not only was this played at a perfect time of night, but they played the video from the film ‘The Hunger’ (which features Bowie for those who are not in the know).  One of the best ever starts to a movie.  Ever!.  How I love this song and dancing to it sealed my night as a perfect one.
In fact David summed it up nicely as I was saying goodbye. He said, ‘Bowie and Bauhaus – it doesn’t get better (for me) than this’.  Thank God for David.  Without him there would be no OAD. (NO GDM and No OAD – OMG!)
Despite being unwell I lasted until 2pm.  I had not expected to last that long and had had an amazing time.  Many many thanks to my increasingly growing OAD family.  Some of the nicest and most stylish people I have ever met! 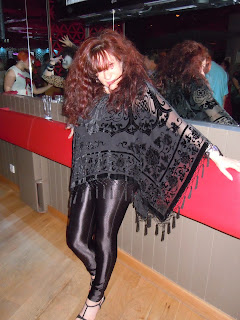