My review of The Bodyguard at Milton  Keynes Theatre is now available: 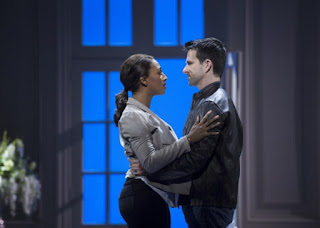 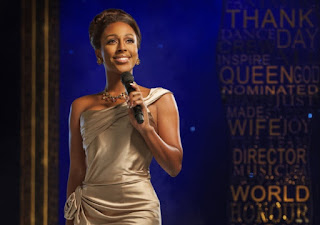 Since I was 16 years old I had always considered having a tattoo.  My step-brother was a tattooist and was covered in them so from an early age I admired the artwork and talent.  My idea of what design to have has changed over the years; as a teenager I wanted stars and a moon on my ankle.  As I approached 40, I had decided on something abstract on my back.  Unfortunately, I fell down the stairs and hurt my back to that felt it was the universe’s way of telling me not to have a tattoo. So I left it. I still had virgin skin.

In January 2016, David Bowie passed away.  I have loved David Bowie since I was 12 and would describe myself as so much more than a fan.  He is a part of who I am.  He knows me.  He loves me.  He raised me.  I felt lost without him.  But in my grief of his loss I found the Bowie community, many who felt the same way as me. They felt the loss as deep as I did.

So when some people started to get the ‘Blackstar’ tattoos I considered it too. I felt it was a permanent way of telling everyone how much I loved him with no words.  Not that I needed a reminder, but it would also comfort me in my grief.  It would be a big step as I hate needles and after watching all those tattoo mistake programmes I was worried about having something permanent on me that wasn’t perfect.  But I knew I really wanted this.  I wanted to join the gang.

I couldn’t just rush into it. I wanted to research to make sure I made the right decision. I found out that all tattooists should be registered with their local authority. Hygiene is very important too – so as I was faced with new photos of other people’s tattoos everyday on Facebook making me want it more – I still took my time to research.

I wanted a personal recommendation. It was hard as my friends offering suggestions hadn’t used the person they suggested. Or the artwork wasn’t the sort of design I was looking for. I knew I needed someone who was good at line work. Luckily since January two Facebook groups had been set up just for Bowie tattoos. This was great as I was able to look at variations of their Blackstar designs. I asked them for personal recommendations and narrowed my options down to two tattooists that I really liked and that were commutable. One was in Coventry and one was in London. I liked them both. When I found out that the London one wouldn’t do the stars as small as I wanted, my decision was made.

So almost three months to the day we lost Bowie, I caught a train to Coventry.  I hadn’t been for many years and it has changed in places with new buildings and landscaped greens. Almost unrecognisable from the 70’s look of many buildings I remember.

I headed for the cathedral and with a print out from Google Maps and my smart phone tried to find my destination.  When I found it I was warmly welcomed and offered a cup of tea.  I relaxed and not felt rushed or hurried at all.  We discussed the final changes to my design and I chose my final font for the lyric which was actually a difficult decision. The font was called ‘Angelface’ which felt right and looked right.

I had decided a while ago I wanted the Bowie Blackstar’s.  I like the abstract design that spells out Bowie but that not everyone would know.  I like the idea of being part of a secret bowie society. I have always been a lyric person and knew that I also wanted a lyric on my arm.  This was a difficult job as I love so much of his work and so many of his lyrics mean so much to me. Eventually I narrowed it down to two.

‘It’s only forever’ from Labyrinth.  I liked this as my love for him is forever and so will the tattoo be.  And I do spend my life quoting from the film ‘she chose down?  Too late now’. ‘Come inside – meet the Mrs’.  ‘I need you Hoggle’.  Yep I was always a big Labyrinth fan and especially ‘You have no power over me’.

‘Cause you’re wonderful’ from Rock ‘n’ Roll Suicide.  I like the fact he could be saying I’m wonderful, or I could be saying he is wonderful. My blog is called ‘It’s a wonderful life’ and Iike the positive connotations. I also sang this loud when I visited the V&A Bowie Is… exhibition. When he says ‘Not only is this the last show of the tour but it’s the last show we’ll ever do’, I always cry.  It was the winner and the right decision to put it on my arm forever.
I wanted it to look like a bracelet around my wrist and to finish it off have a small red heart as Bowie will always be in my heart.  This was my original idea and I had not seen anyone have anything like this to date.

I don’t know what I had been worried about.  The tattoo space was lovely and decorated in a quirky way.  It certainly appealed to my personality.  I felt excited about doing this.  It was the right time and the right place.  Natalie asked me what music I wanted to play and I chose Young Americans and Hunky Dory albums. I’m a 70’s Bowie girl at heart. I admit that I had a small tear in my eye when 'Somebody up there likes me' came on.

To my surprise it didn’t hurt at all.  And suddenly I had a tattoo.  It had taken me years to find the right design, the right reason, the right place to have it but now I was a Blackstar and proud to be so. 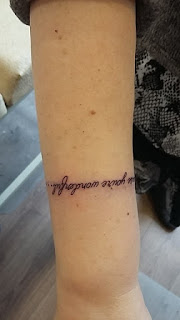 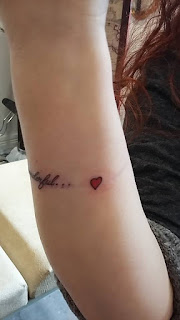 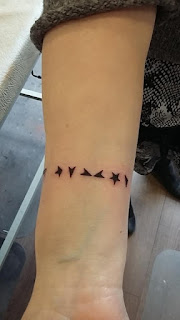 My first experience of Hairspray was the film.  The original film with Rikki Lake, Divine and Debbie Harry . I loved it immediately.  I have to be honest and say I have not brought myself round to watching the remake of the film.  I just can’t see John Travolta (sex god of Saturday Night Fever and Grease) dress up as a woman.  He was my own heart-throb once upon a time.  But I had never seen the stage show.  So front row on 7th April 2016 I sat down not quite knowing what to expect.  A friend had told me that the music was written just for the stage show so I wouldn’t necessarily know the songs from the film.

The story is based around Tracy Turnblad who is a typical teenager in Baltimore during the early 60’s.  It’s a common theme of love, fitting in with your peers and racism.  Okay racism isn’t always a common theme but this show really addresses it well.

From the first scene of Tracy in bed (an upright bed on stage so we can see her) she is instantly likeable.  This makes the whole show work. All the songs have an energy and vibe that makes the show a feel-good show.  Tracy is played by Freya Sutton and gives a perfect performance of an chubby but enthusiastic teenager and her love of dancing.

We soon meet her mother Edna who is traditionally played by a man.  Matt Rixon honed his inner motherly instincts and was a rather pretty woman.  He was totally believable in the role and I enjoyed his performance very much.  Her husband is played by Peter Duncan and together they give Morecombe and Wise a run for their money as they are very funny on screen, especially during the number ‘You’re timeless to me’.

Tracy’s best friend is geek Penny, played superbly by Monique Young.  Her awkward dancing and nervous status transforms when she falls in love and it is wonderful to experience.

Amber Von Tussle is the all-round cheerleader type.  The perfect hair, teeth, weight and level of bitchiness to be the best dancer on the Corny Collins Show.  She is played by Lauren Stroud and delivered an effortless performance of Amber.  It is hard to play someone that you know the audience may not like as everyone is rooting for Tracy. Lauren plays Amber with perfect balance to that we don’t quite hate her and can forgive her.  Claire Sweeney plays Velma, Amber’s mother, who is the producer of the show.  Claire was absolutely fantastic in the role and didn’t flinch for a moment out of character.  At one point she comes into the audience and stopped in front of me danced then stood on my chair to shout to the rest of the audience that they shouldn’t like Tracy or have ‘coloureds’ on her show.  Again it’s a difficult role to play because the character is made to be disliked but Claire was so great in the role and gave respect to Debbie Harry’s (yes Blondie!) original portrayal of the role.  If Amber is the cheerleader then her quarterback boyfriend is Link and he is played by Ashley Gilmour who gives a great performance of that teenage heartthrob.

I did mention racism and so let’s talk about some of the best black actors and dancers you will ever see!  Seaweed is the star of the Corny Collins Show on ‘Negro day’.  Once a month they allow blacks to host a show.  Dex Lee plays Seaweed and that boy could sing dance and oozed sex appeal.  I was almost expecting Tracy to fall for him instead of Link!  Seaweed has a cute little sister, played perfectly by Karis Jack.  Her enthusiastic dancing and petite-ness gave the character exactly what she needed.  Fantastic performance.  Their mother is Motormouth Maybelle and on tonight’s performance was played by Aiesha Pease.  Aiesha actually make me cry with her singing of ‘I know where I’ve been’.  Simply a faultless performance and extremely moving.

Every single cast member was exceptional and work as a team to bring the show together.  The dancers absolutely took my breath away with some of the moves.  With the exception of West Side Story (which is my all-time favourite musical) this is the best choreography I have ever seen on stage!

The moral of this show is dream big and it could happen.  I am not going to say ‘I have a dream…’ but you get the point.

Well done to everyone involved in Hairspray.  If you only see one show this year – make it Hairspray! 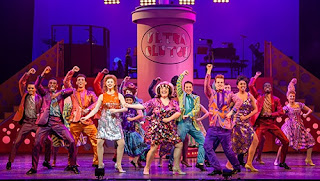