For those of you who are not already familiar with the British Electric Foundation or BEF concept, it was founded by Martyn Ware as an idea to launch a portfolio of many future musical projects of which Heaven 17 would be just one.  Of course Heaven 17 went on to be very successful.


BEF (or British Electric Foundation) is about real talent and this gig was going to be a very special one – it was to promote the third BEF album.  The album called Dark was well overdue if they average one album every decade.  As for the content well it is dark by name and dark by nature.  Martyn says the idea is to take an already well known track and ‘darken it up’ which means he really emphasized the words of the song and the dark meaning behind the lyrics rather than it just having an upbeat tempo.


Arriving early to get a good spot, I was greeted by the best DJ on the planet (apart from my husband – clause in marriage contract) Mr Mark Jones.  It is obvious he really loves his job and really gets the crowd going with some great tracks.  I felt his set should have been longer, but not to worry as we were equally blessed by the support group, The Echoes, a young band and major talent that really gave their all.  The crowd certainly warmed to them.  If a starter sets you up for your main course, then The Echos certainly did that for us.  Mark reappears to play a few more excellent tracks while the stage is set up for the main event.


Martyn comes on with the band and promises a very special night, kicking it off by introducing his best friend, Mr Glenn Gregory.  Glenn does a perfect rendition of ‘It was a very good year’ which was a hit for Mr Frank Sinatra and younger fans may know the track from Robbie Williams  Sing when your winning album.  Glenn hits every note perfectly and even if I think he may still be a bit young to talk about his autumn years, he does it justice.  What a start to the evening!


Then Martyn introduces Mr Andy Bell (From Erasure) who comes on and knocks us dead with his version of ‘Breathing’.  The audience are barely breathing  just listening to him. You could hear a pin drop.  He follows this up with another track, ‘Love of my life’.  Andy’s performance is at the best he has ever been.  He is emotional and pitch perfect.  Fabulous.  It makes me even more excited about how anyone can follow that.


But who can follow that?  Well Sarah Jane Morris (best known as the woman who sings on The Communards track ‘Don’t leave me this way’).  Wow does she know how to own a stage!  Her dress is perfect for the concept of the Dark album – black and quirky.  And boy does she deliver!  Her voice is so good and she gives an outstanding performance with her two tracks ‘I don’t wanna know’ and ‘family affair’.  If I wasn’t already standing she would be getting a standing ovation from me.


Next, our own Billie Godfrey comes on (she is already part of the Heaven 17 family and well known for her delivery of Temptation) but how would she fare singing ‘Smalltown Boy’?  Well this girl can sing and she really shows her talent off to full effect on a slow number.  She follows it up with a track called’ Free’.  This is simply bliss.


To follow this, the other backing singer from Heaven 17 (the baby of the H17 family) comes on to frankly knock us dead again.  I cannot believe the great voice that comes out of this small young woman.  She sounds like she was born with soul and it is oozing out of her.  She gives us’ Copilot to pilot’ and ‘walk in my shoes’.  Martyn agrees by telling the audience to leave now if they don’t get it.


Next Glenn comes back on and sings ‘Party Fears Two’.  I have heard him sing this several times at various gigs and it is always emotional.  This is the same venue where he first sang it for Billy MacKenzie’s tribute concert, but this is the first time he has ever made me cry.  (And I mean chin quivering proper crying here – I was a wreak).  He delivered it with such emotion and I am sure Billy is looking down on him and is proud of him.


‘Didn’t I blow your mind this time’ is covered by Green Gartside.  For those who don’t instantly recognise the name, you will recognise the voice as Green is the voice behind Scritti Politti.  He does this track justice with a mellow and easy going melody with slightly sinister undertones which make it moreish.  He did blow my mind this time!  He follows this up with ‘I don’t know why I love you’.  What a fabulous voice he has and what a fantastic show this is!  What more is there to come?
I make no apologies for telling it artist by artist, track by track as it would be a real tragedy to miss a review of anyone.


Berenice Scott is best known as the keyboard player in the Heaven 17 family.  Who knew she could sing?  Well she can and sent shivers down my spine as she covers’ Blondie’s ‘Picture this’.  It is a very brave person who would take on such a well known track but also to step into Kate Jackson’s shoes (She was in New York and unable to make it to this BEF gig but it is Kate who sings this on the album).  However at the risk of sounding cheesy from a rather well known TV show, Berenice makes it her own.  She was amazing and it was great to see her centre stage away from her keyboard.  She should do this more often.  Martyn really does know how to spot real talent!
And talking of Martyn spotting real talent, this next artist is someone who works as an Undertaker in his day job, but if there were any justice in the world, David J Roch’s voice would be enjoyed the world over.  What a talent this young man is.  He gave a simply stunning performance of ‘Same Love’.


Claudia Brucken comes on next. (Best known from Propaganda) and sings Bert Bacharach’s ‘The look of love’ followed by ‘These boots are made for walking’.  Claudia has her own style and gives a unique twist to these classics.  And I just want to mention Martyn here.  He is on stage the whole time – so while other artists come and go, Martyn is playing with them, singing with them and being PA for the whole event.  It must be exhausting but I get the feeling that Martyn couldn’t be happier.
I was excited about the next act.  Kim Wilde is a very talented person.  We all know her from ‘Kids in America’ (which has a special place in my heart as without it I would never had met my first boyfriend!), but this is a grown up Kim. This is a raunchy sexy extroverted Kim.  The video for ‘Every time I see you, I go wild’ was nothing short of fabulous.  She looked totally amazing in her vampire killer outfit and when Martyn announces she will be wearing that outfit on stage, well I heard every man in the room’s mouth drop open!  She still knows how to knock ‘em dead and that is just with her looks.


However, Kim is a seasoned performer and has real talent.  The first time I heard this track it took my breath away.  Kim sounds so amazing on it and the song has a sexy undercurrent running through it.  It reminds me of how I feel when I put quality chocolate in my mouth and let it melt slowly.  That is what this track does to me!  Simply perfect!  Kim is the three ‘S’. - sexy, sassy and stunning singing.
She follows this up with R Dean Taylor’s ‘Ghost in my house’ (which is one of my all-time favourite soul tracks).  She can act too as she gives an impression of looking for a ghost on stage.  What a performance!  It doesn’t get better than this!  She finishes her set with her own cover  ‘keep me hanging on’.  Just perfection.

And how on earth do you follow Kim Wilde? You do a bit of Bowie! Glenn comes on and covers ‘Boys keep swinging’ . Now I am not a fan of anyone covering Bowie being a huge Bowie fan myself, but Glenn really does do a fantastic version of this – he has the perfect voice for it and really does show that he and Martyn are fans of Bowie and would never do a poor version.  (Actually I have never seen or heard Glenn or Martyn do a bad version of anything – they are true professionals who always give value for money performances).


So what can follow that? - the final number of the evening and what they always finish with – Heaven 17’s Temptation.
What a performance.  What a gig.  What a night.  What a memory.  I will remember this event for many many years to come.


This gig was like a trifle.  Each layer is identifiable and individually delicious on its own but together it takes perfect.  The fact that Martyn has announced there will never be another BEF gig is so sad- it’s the electronic equivalent of when Bowie said ‘Not only is it the last show of the tour, but it’s the last show we will ever do’.  When music of such quality and distinction evokes such emotions and diversity – it is truly a tragedy that this is the last ever BEF gig.
They say genius isn’t always appreciated in its own lifetime and I feel this is true of Martyn.  In years to come people will gasp at how many people just didn’t get it.  But for now, know you are one of the few who do.  If you were lucky enough to get a ticket and experience this – you may understand my write up and know you have shared in something magnificent.  If you missed it, well you missed a unique experience – never to be repeated.  Go buy the album and console yourself at what you missed!
Photos below:
1. Martyn Ware
2. Glenn Gregory
3. Billie Godfrey
4. Kelly Barnes
5. Green Gartside
6. Berenice Scott
7. David J Roch
8. Claudia Brucken
9. Kim Wilde
10. Andy Bell
11. Sarah Jane Morris
More photos can be found at: http://www.flickr.com/photos/jasminestormie/sets/72157636260178045/ 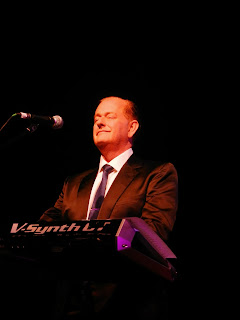 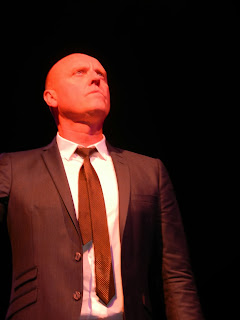 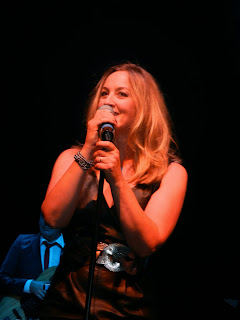 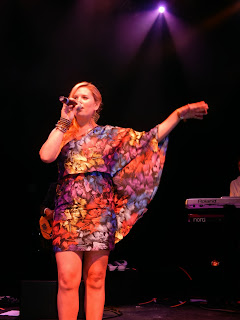 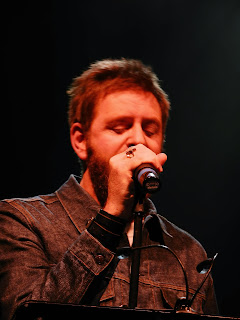 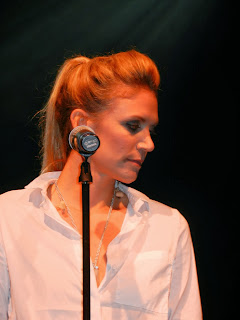 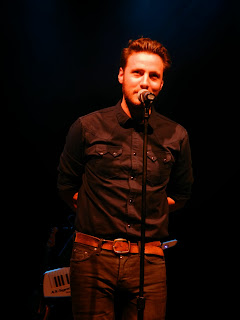 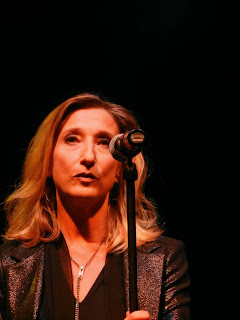 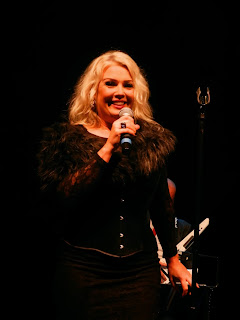 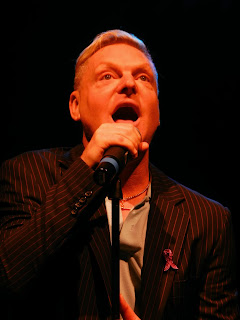 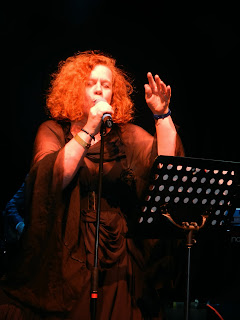