Bowie is…
I want to take you on a journey…it is an emotional journey of my life…and I can tell you it all via the Bowie is exhibition currently at the VA.


The backstory to my going to see the Bowie is exhibition at the V&A is detailed. I did not realise they would sell out online so quickly and was devastated when I heard they had.  My lovely hubby bought some last minute evening showings but they were for the last week of the exhibition in August and I am not known for my patience.
So under the guise of taking my 15 year old to a museum, I travelled 50 miles to see if we could secure tickets on the day.  I thought I had been clever, choosing a day that was neither the weekend nor a school holiday, but alas there was still easily a queue of people at least 150 in front of me.  We queued for about half an hour when I decided to ask about membership.  I found out that members get free entry to the V&A exhibitions (I knew that) but each membership can get up to four children under 18 into it for free!)  plus 10% off all the Bowie stuff I am gonna buy – plus 10% off the coffee shop.  Sold to the lady in the Bowie t-shirt!!  My only regret was I hadn’t bought this months ago and visited it hundreds of times already.
I did not know what to expect but we picked up our headphones and went in.
The first thing to know is there is not a set way around. Take time to take it all in and explore everything. Watch out for the peepholes in the black wooden doors. Read each David Bowie is..line.


It is an art exhibition and therefore talks about how Bowie has influenced attitudes, fashion, music and more. Bowie ’Art’ includes his music, his costumes, the way he designs his sets for videos and tours, his films and plays…is there no end to this man’s talent or …forget ‘or’.  There is no end to this man’s talents!
The exhibits include a letter explaining why David Jones became David Bowie.  It has the hand written music of The Laughing Gnome.  It has taken my breath away and I am transformed back to the first time I heard ‘Can’t help thinking about me’.  And this is only the first part.

It continues with more hand written lyrics including Life On Mars and Five Years.  I found it really interesting to see how the lyrics had changed from what Bowie had originally put to what we know and love the song of today.  For example, ‘stared at the wheels of a Cadillac' – was originally tram or train (it’s crossed out so rather hard to see).  One of my favourite areas in this section was the life on mars video. I stood close and really felt I was in the Top of the Pops studio.  I danced and pretended I was the only one there.  Did you know that the costume for that performance was based on droogs from the film A Clockwork Orange?  No?  Neither did I?  This exhibition is educational even for a die-hard fan who knows an awful lot about Bowie.


There are many outfits throughout the exhibition, but some of my personal favourites are the following: Jazzin' for Blue Jean, Earthling jacket, Life On Mars (blue suit). Thin White Duke (black and white) and of course the iconic clown from Ashes to Ashes.  I was amazed that it was all in such good condition and had been saved all these years.
I enjoyed seeing the verbaliser which is a computer machine that randomises sentences to make a lyric stand out in a way you may not have thought of before.


It goes right up to modern day as well with videos such as ‘Where are we now’ and ‘The stars’.  I also enjoyed the puppet from ‘Where are we now’ as Bowie was looking right at me and blowing me kisses and winking.  Had better not tell Iman!  ;)
There is a special part of the ‘Berlin years’ looking at Low, Lodger and Heroes.  It even has his keys to his apartment from those days!


One of my favourite parts (or do I mean another of my favourite parts) was when I went into what I can only describe as a stadium with Bowie singing to me.  (Ok, me and a few hundred others in the room) but it had been very cleverly created with costumes of the videos light up behind the thin veil.
One comment that has always got to me has been ‘Not only is it the last show of the tour, but it’s the last show we will ever do’ made me cry. I sobbed all the way through ‘Rock n' Roll Suicide’ and when he said give me your hands I was singing and raising my hands up to him as if he was only singing to me.


I question how strongly the people who attended are as a fan as I saw no one sing,  no one dance, no one excited comment, so I felt justified when after a few songs I clapped at the end of each one.  I don’t care what other people think.  I love Bowie and wanted to express it.  Bowie has been in my life longer than both my husbands, my kids, most of my friends.  To me, Bowie has been the friend I needed when I was low and lonely as a teenager, and that bond is stronger than ever today.
This was such an emotional journey for me.  At each part of Bowie’s life and change in direction, I have grown and changed too.


Thank you Mr Bowie for being there.  You were my first love. I will never forget you.
Note: since writing this I have been again twice to enjoy it.  I saw different things each time I went.  It is where I want to be buried when I die!!


And in case you wondered just how influential he has been in my life, last week my mum asked me why I had never married Bowie. ‘Mum, he never asked me!’ 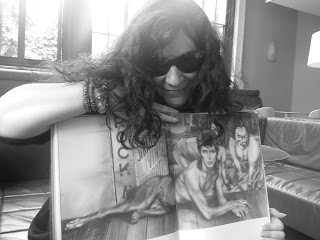 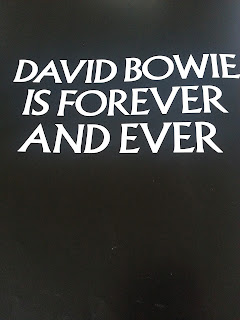