I don’t know where to start with this one! I thought Abraham Lincoln- Vampire Hunter had already won the trophy for most ridiculous film of the year, but Rock of Ages is a strong contender!
If you like rock – you will hate this! If you like real music – you will hate this! If you liked Burlesque and Moulin Rouge you will probably love this.
REO Speedwagon must be laughing all the way to the bank!
It is a simple  story set in 1987 - girl goes to big city and falls in love ..blah…blah…blah. But set in a rock club in LA. Everyone in the film can hold a tune (which is a step up from Mamma Mia) but the script is dire. And Americans just don’t know how to do 80’s properly!  Sherrie’s hair is all wrong – it needs to be much much bigger than it is (and it is way to styled – this was before the invention of frizz ease!)
Alex Baldwin is a great actor and even he kept a straight face when he has to pretend he is a gay rocker who falls in love with Russell Brand.  I have never met any gay rockers – never mind gay rockers who own a huge rock club and look like hard men. (I am not saying they don’t exist – but I never met one).
Can it get any more ridiculous, I hear you say? Well frankly yes!!  Catherine Zeta-Jones looks like posh spice in the end of the film (keep an eye out or you will miss her!)
And I don’t remember pole dancing bars in the 80’s. Maybe I lead an innocent life…
I know it is supposed to be funny – but it is more laughing at anyone who was a rocker rather than laughing with them. It feels like a cruel joke.
The saving grace of this film is I rather fancy Tom Cruise in it. He is excellent as Stacee Jaxx and I found him rather attractive. I haven’t been able to say that since Top Gun.
Verdict: This is karaoke rock. Do ya really wanna rock??!!!!

By the way: this is how I looked in the 80's. The black was homage to Siouxsie Sioux and the photo with the hideous yellow shirt is an example of my big hair!! 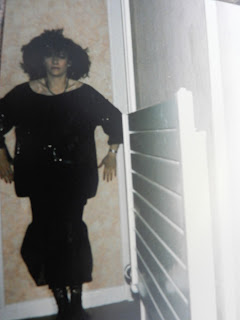 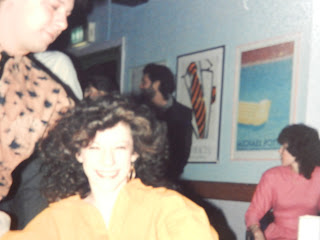 
I did not raise any hopes about this film as generally sequels are not ever as good as the original. (The Blues Brothers and Jaws to name two examples). The second Men in Black film had also fallen into this category. But I honestly cannot find anything wrong with Men in Black 3. IT IS AWESOME!
The story is excellent and I loved the time jump aspect of an already complicated story. You are sold on how good this film is in the opening sequence; such great action and sci-fi in a Chinese restaurant.
Will Smith is (agent J) a pleasure to watch with Tommy Lee Jones (agent K) making up the original team. When J jumps back in time to try to save his partner K, he meets the younger K (played by Josh Brolin) who is so good that we forget it isn’t Tommy Lee Jones. The story is great as Boris is the baddie trying to get revenge on K who put him away in a prison for 40 years.
There are moments of pure genius in this film. Andy Warhol is an agent who desperately wants to escape all the arty types! Lady GaGa is an alien (no surprise there!) and my favourite character is Griffin, a small alien who can see multiple futures and is totally adorable.
This is a must see film. It makes you laugh; It makes you cry. We saw it in 3D and some of the effects are very good.
Verdict: They don’t make them like this anymore! If you only see one alien film this year, make it this one!
Posted by Jas at 13:03 2 comments: