I have loved Level 42 since Love Games.  I remember Love Games distinctly as Radio 1 did a competition using the beginning of the track to rap over.  (I am ashamed to say I can still remember it). This was in the days when you had to send postcards in and couldn’t Google the answer to the competition.  I never won, but Love Games and Level 42 became a big part of my teenage years.  (checking Wikipedia I was shocked to find it only got to number 38 in the charts.)
I loved the “Level 42” album including star child, why are you leaving and turn it on. I loved “The pursuit of accidents” with Weave your spell and The Chinese way.  OK, I have grown up enjoying Level 42 but until tonight I had never seen them live.
Well that was about to change at the Royal and Derngate in Northampton on a cold October night. I drove there which was rather stressful with the one way system, but got there with plenty of time. I had not been to this venue for over 10 years so went to the back stage door to find out how to get in.  They were lovely people who were very interested in my review of tonight’s gig as they don’t often do standing gigs.  Well I am not sure if it is the age of the Level 42 fans but it was a very civilised affair.  No pushing, no checking bags or treating us like criminals, (Blur’s gig at Hyde Park threw my hand cleaning gel away for goodness sake!).  It was just the kind of way a gig for my generation should be!  (And anyone who reads my reviews will know my luck with drunks, glad to say I didn’t encounter any on this occasion).
I enjoyed the support who was Dan Clews.  He did an acoustic set of mainly original material with a cover of China in my hands.  He interacted with the audience and could sing and play well.  I met up with him afterwards and he was a lovely guy to boot!
But Level 42 was what I was here to see and Level 42 is what we were all cheering for when they came on.  Turn it on they sure did!  They started by playing the Running in the Family album in its entirety.  Tracks such as Lessons in love and Running in the family had the crowd dancing and set the tone for the night.  It’s over was sung with such sincerity, it was moving.
Level 42 sound exactly like the recordings on their albums.  I was very impressed.  They moved on to do a bit of an acoustic set with Mike on an accordion and Mark on an acoustic guitar (Not bass!).
Then they said we came to hear some funk.  We sure did!  They rocked Northampton town with some of my favourite tracks such as Starchild (Mike had a bit of a boogie!); The sun goes down (living it up) and finished on The Chinese way.
This was a fantastic set and I could watch Mark play his bass forever!  Their music took me right back and I felt just like a teenager again. It was wonderful.  Thank you, Level 42, for a wonderful gig.
My only disappointment was I really never got to hear them play Love Games as they cut it from the show (although they had played it two nights ago at Guildford).
So this is an open invitation to Level 42, if they nip round my house and play it for me, I will provide all the tea/coffee necessary!
Love you guys. Thanks for a wonderful night. xx 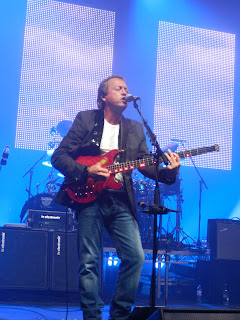 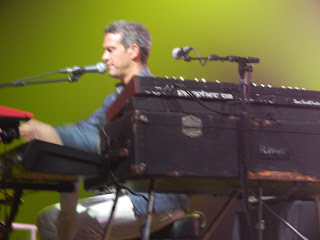 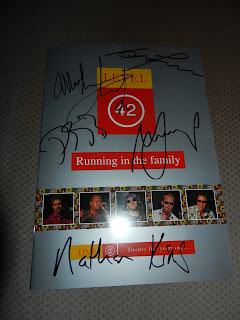 
I have come to the conclusion that it is rather hard to make a good time travel film. You spend so much time trying to explain how the time machine works and how it would impact on your past or present timeline. To be honest the only really successful one is Back to the Future.


To make a hit film you want to make a film that people want to see more than once. This means more money at the box office and again when released on Blu-ray or dvd. Back to the Future ticks this box too.  Unfortunately Looper doesn’t!


Basically 30 years from now time travel has been invented and outlawed. Gangsters send back people who they wish to do a “garbage disposal” job on and a Looper kills them and gets paid for it.


But what happens if the person they send back is you?


It has promise as a story, but made for the American audience everything is explained in minute detail such as how a scar on your hand appears is because they are currently cutting up your younger self or the TK link or even the range of the guns. It feels that the script is so busy educating us on what it all means it diminishes from the pace of the film and the action.


Bruce does what he does best, in fact the acting from Bruce, Emily Blunt (who can’t love her?) and Joseph Gordon-Levitt are all excellent but the script and execution of the story lets the film down.


If you ask what I would do to improve this story, I wouldn’t explain so much as it takes too much time up and I would give an alternative ending where Sara stands at Joe’s grave pregnant with his child. Loop the Looper! It would give a lead for a sequel too.  Next time  Hollywood should just ask me!
Posted by Jas at 13:05 1 comment: