Footloose.  Footloose.  Kick of your Sunday shoes.  We all remember the song but how does this translate to a stage musical of the 1984 film starring Kevin Bacon?  The story is of Ren McCormack who leaves Chicago with his mum for Bomont, a small town in the mid west.  This town is a culture shock from the big city of Chicago and to top it all off, dancing is banned.  Yes, they actually passed a law to say you are not allowed to dance anywhere within the town boundaries.  Ren cannot believe this and challenges it to which he is labelled a troublemaker.  This is a church-going community who believe everything Reverend Shaw Moore says.  He has the power over the town. And over his family, his wife Vi Moore and his daughter, Ariel.

Maureen Nolan plays Vi and she plays a very straight laced wife of the Reverend.  Maureen is a million miles away from that disco hit I’m In The Mood For Dancing as she takes on the mediator between her husband and daughter.  Rev Shaw is played by David J Higgins and owns the stage with his authority and presence.

Ariel has three female friends and together they are a bit boy mad.  There is a similarity between their friendship and the four Sex And The City girls.
Ariel is Carrie.  The leader of the pack and a woman who knows what she doesn’t want even if she doesn’t know what she does want.  Ariel is played by Hannah Price who is definitely going to be as successful as Sarah Jessica Parker.  Wendy-Jo is boy mad – so much like Samantha.  Natasha Brown plays Wendy-Jo and makes the role her own.  Rusty is a bit crazy and with her red hair is obviously Miranda but with a personality implant of Columbia from the Rocky Horror Picture Show. Rusty is played by Joanna Sawyer and has an amazing voice.  Urleen is like charlotte with her dark hair and quite manner and is played by Miracle Chance.

Rusty is crazy for Willard.  Willard quickly becomes Ren’s friend but is a bit slow in realising how to talk to girls.  With Ren’s help this is only going in one direction.  Willard is played by Gareth Gates and he absolutely steals the show.  He is funny, great at physically being Willard and when he gets out of those dungarees – OH BOY! He is so fit he could be in The Full Monty!  He gets a lot of the best lines as the humorous sidekick.  Ren is played by Luke Baker and is great as the cool kid.  He can sing and dance too.  A perfect leading man.
The show has some great numbers in it including well known songs such as Holding Out For A Hero and Let’s Hear It For The Boy as well as some lesser known songs for the show such as The Girl Gets Around, Mama Says and I Can’t Stand Still.

If you want a good time and your feet want to dance, forget Bomont – get along to Milton Keynes Theatre where this show is on until 22 October. 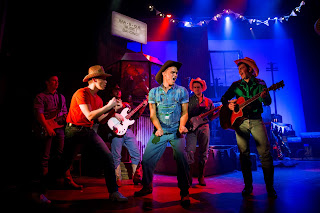 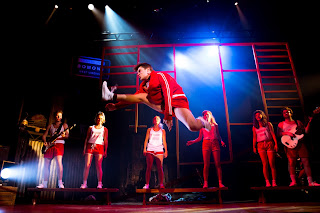