In third place for most ridiculous film of the year….(drum roll) is Ted.
Let me first moan about the time frame issue that bugged me throughout the film. John Bennett (played by Mark Wahlberg) is 35 years old. I know this because they tell you so at least twice. So how old was he when the Teddy Bear came to life? The clothes and Star Wars toys suggest late 1970’s. But 2012 minus 35 years is equal to 1977. 1977 IS the year Star Wars came out but that would make John a new born baby, not a child of 8 as portrayed in the movie. They say it is 1985 but were kids still playing Star Wars in 1985? Return  of the Jedi came out in 1983. (For those of you who are not geeks, that is the 3rd Star Wars film to be made, but technically the 6th film).

Who is this film aimed at? It must be those under 30 who would not know that Seth has F**ked up.  How many teenagers seeing this film will even know who Sam Jones is? Flash Gordon was made in 1980! Even Jonny (Ted's owner) would have trouble remembering that long ago!
So what else is wrong with it? Well it is very basic humour in places. Do you really need to say “There is a Shit on my floor!” to get a laugh? (I didn’t laugh). But I did laugh in places those under 30’s didn’t. (Loved Ted’s interpretation of Pink Floyds “If ya don’t eat ya meat” line.)
Patrick Stewart is the narrator and some of it is excellent, some of it tries too hard. Patrick is too good for this kind of film! Beam him up already!!
Getting past all that, you start to believe Ted is a real character with a life of his own. The effects are so good you stop thinking about how they are doing it. There are some classic funny moments (The Thunder buddies song is a cult waiting to happen) and it is predictably a love story.
Hot Mila Kunis (That is her full name) plays Lori, John’s girlfriend of four years. She wants their relationship to move forward but feels Ted is holding John back. Ted takes a lot of drugs, drink, swears and has sex a lot for a 15 rated movie.  All those 15 year old going to see it will think that it is cool to do those things. There is no moral to the story regarding drugs here.
My favourite bits: The Thunder song, the joke about Hasbro, anything with Flash Gordon in it, the theme tune from Star Wars being suggested it was from the Notebook, all the famous people playing themselves …well there are many.


Verdict: tries really hard to be funny and is excellent in places, but could do better. 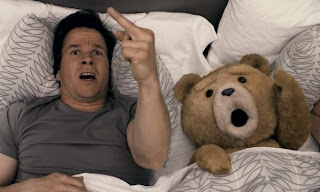 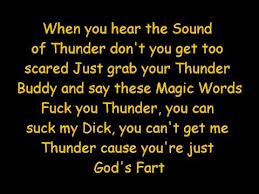