I was hesitant about going to the cinema to see this film just in case some maniac did a copycat killing of the terrible tragedy that happened in the US this week.


But we shouldn’t let this stop us living our lives (We still fly on planes don’t we?) so I went to see this film anyway.
I think even if you had not seen the other Batman films this film is entertaining as a stand-alone film. It is very watchable and the special effects in the action scenes are really good.
I liked Bane as the villain. He had almost a Mad Max out-and-out violence about him. (Why do most villains have an English accent?)  He is played by Tom Hardy, and is almost unrecognisable from his character in “This means War”. (The sign of an adaptable Actor).
I am not a fan of Christian Bale. However he does do the part of Bruce Wayne justice and I love the interaction scenes with him and Alfred (played by the legendary Michael Caine).
Anne Hathaway is Selina (but some would say she is Batgirl!). I was unsure about her for the role after her disastrous role in “One Day” but she was great in the part and had a kick-ass outfit!
The unsung hero of the film is Blake (played by Joseph Gordon-Levitt), who is a cop trying to keep the peace in Gotham with no Batman to back him up.
Some of this film feels very predictable (when you watch it you will know what I mean).
The real star of this film is the gadgets. I love the bike. (Bat-Bike?) and how its wheels move when changing direction. (My next birthday present perhaps?!). The “Flying Bat” is also way cool and I love all the tech in the Batcave.
I am glad it is not too dark. I have a strong love of the 60’s series and film starring Bruce Ward and Adam West, and part of me pines for those fun Batman days. Holy Retro Batman!
Verdict: If you have three hours to spare, give it a go. It is worth the investment! Kapow!
Me and my New Bike! ;) 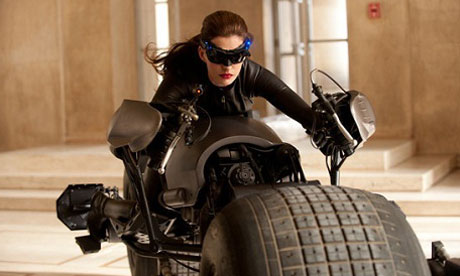