Milton Jones finds the temple of daft in Milton Keynes!

You know who Milton Jones is. He is the strange man from Mock the Week with the Hawaiian shirt and massive hair who delivers deadly one-liners in a deadpan style. What I really love about Milton is his respect for his audience. He treats us as if we are as intelligent as him and doesn’t need to explain it. This is the first time I have seen him live and I can say without any doubt that it was worth every penny.  His razor sharp wit is delivered so well and I didn’t stop laughing all night.


Here is an example of what I found funny:
He waved a Union Jack Flag…and gave it a voice. He then got a Scottish flag out and gave it another voice.
Scottish flag: I’m leaving


Scottish flag: where are my presents?


He gets a welsh flag out and gives it a voice


Union jack: go on then. You are too lazy to leave


Welsh flag: come over here and say that


I won’t go on about all the flags but have to share the chequered flag you get at the end of a race.


Just pure genius!!
He has support from Chris Stokes, who looks like he is 18 but apparently he is 31. He did a great set including reasons why he is getting divorced. I think you’ll find his geekiness might be one of them.  Chris knew we were there to see Milton so described himself as the Gherkin on a burger. We want the burger but some people don’t want the gherkin. Others don’t mind it. Very clever analogy.


Milton comes back on and this is probably the time to say it is called Milton Jones and the temple of daft. He loosely has a story about teachers, a treasure map and a woman called Amber he met on a train but this is just a platform for his brilliant one-liners .
Examples of some that I can remember:


Dilemma. Dial Emma…no she had her chance. Dalai Lama.


My dad felt it was his job to put food on the table. My mum used to put it back on the plate.


Taylor Swift is swift at all. It took them three weeks to get my trousers back to me.


He was in Leeds once. He saw a beautiful lady wearing a Miss Leeds banner. Good idea he thought.


His uncle was a country singer. ‘Greenland’. ‘Sweden’..(singing)


He fell down a drain once but was rescued by Diana Ross…sorry not Diana Ross. DynoRod!


He had a fantastic nickname from his teachers at school. He was constant Super-vision.


His PE teacher taught a bit of running.  ‘Run’. A bit of swimming. ‘Swim’. And a bit of Geography. ‘Jog’.
Okay, my delivery is not as good as his...this is why you need to see him live!  He is the new Bob Monkhouse. I totally loved him and laughed more than any other comedian I have seen live ever!!! (and yes I have seen a few). He is comedy gold and I would say to everyone reading this that you need this in your life. It is proven that laughing makes us live longer and who doesn’t want to laugh? Milton Jones is funny and if you don’t find him funny then you need an operation to find your funny bone! 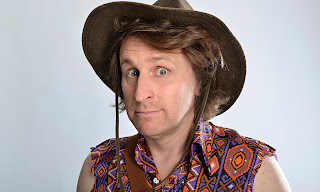