Heaven 17 fans are going to live for a very long time!


Those of you who read my blog will know that I have already declared a love for Heaven 17.  But let me try to explain how I felt about this gig.
If you have seen the movie, love actually, you will know the story of Sarah, the American who is in love with Karl her co-worker for over two years. At the Christmas party they finally get it together and she invites him back to her house. She asks him to give her 5 mins and secretly jumps for joy behind the wall over how excited she is. Times that a few hundred times and it will give you an idea of how much I was looking forward to this gig! It was my birthday week and I had flown back from Prague the day before to see Heaven 17 do the Luxury Gap album in full.


·         Ensure you are in the country they are playing. (flew in from Prague especially)


Heaven 17 are under appreciated. Their talent and experience of electronic pop is outstanding and I have always considered Martyn Ware to be a musical genius. He is a founder of that sound. Heaven 17 has never been awarded the commercial success that they really deserve.  Everyone knows Temptation, but I wish they appreciated the other H17 work that only a cult few seem to get. Anyway I proudly belong to this cult and was off to enjoy an awesome gig.
The set list was always going to be great as the Luxury Gap features works such as Crushed by the wheels of industry, Let me go, We live so fast, Come live with me and Temptation.
Who’ll stop the rain is one of those under appreciated tracks, so if you don’t know it, go Google it now and see if you agree. Let me go has such powerful lyrics. ‘I walk alone and yet never say goodbye, let me go’.  Come live with me is always a crowd pleaser but when Glenn sang it straight at me I had the green eyes of every woman in the audience upon me! They don’t need to worry; I am not seventeen either.
You’ve lost that lovin’ feelin’ which was originally by the righteous brothers, was done simply with just Glenn and Martyn singing. It was beautiful and lovely to see Martyn come out from behind the keyboard.
Fascist Groove Thing really got the crowd going. Yeah baby! Mike Read should be hung for banning this track but he was one of those who ‘just don’t get H17’. I wonder if he regrets his decision today?  Penthouse and Pavement is in my top five of all-time favourite albums so anything H17 played off of it would make me happy but they did several tracks (yes I was so ecstatic my cheek bones hurt from smiling too much!) including a new version of Geisha Boys and Temple Girls and ‘we’re going to live for a very long time’. This is another moment of musical genius. How clever is this track? The lyrics and tune work beautifully together to produce irony of the sweet pop song with lyrics that can be almost evangelical. Glenn is almost ministerial in his deliverance of the song.  I’m your money should have been on the Penthouse and Pavement album and every H17 fan knows it fits that genre.
The boys did a few early Human League songs (you should all already know that Martyn is a founder member of the band), but I hadn’t heard ‘Crow and a baby’ for years and it was wonderful to hear it again. Being Boiled is becoming an expectation at H17 gigs and they did not disappoint. Then Glenn picked up a guitar and played a version of ‘Don’t you want me’. Martyn should know the loyalty that his fans give him and believe he was the talent in Human League.
One of the most moving parts of the gig was during the encore when H17 did The Associates track, ‘Party fears two’. Glenn told the audience that he did this track a few years back at the Billy Mackenzie memorial gathering at the same venue. You could hear a pin drop as the audience were hypnotised by Glenn’s rendition of the track.
The last song of the night had to be Temptation. Leave them on a high is the motto here. Now for those reading this who like Heaven 17 and temptation but don’t know them well, here is my tip. Go listen to ‘Sunset now’. I challenge you to not love that track just as much!
But that was the end of the gig. I couldn’t believe it had finished so quickly. All the good things have to end, but for me it didn’t end there. Thank you Martyn for inviting me to the after show. Now that really did make my night! (I’m gonna need new cheekbones at this rate – haven’t stopped smiling since).
Heaven 17 have still got it and if you want to see some real 80’s legends, go see them while you can. (Luxury Gap is still touring Europe now or fingers crossed for ‘How men are’ a few years down the line.)
photos from this gig can be found at http://www.flickr.com/photos/jasminestormie/sets/72157631928837797/
Follow me on Twitter: @Jasminestormy 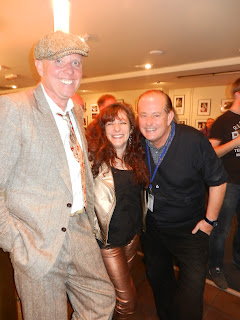